Report updated 6:25 am PST to include Glass Housing patent information

Over the last year several Apple patents have surfaced describing their work on a future folded camera lens system relating to a periscope design for a future iPhone (01, 02 and 03) that will provide superior optical zoom capabilities. Today the US Patent & Trademark Office published a new patent application from Apple that relates to optical prisms and more specifically to optical systems including single element light folding prisms for small form factor cameras.

Telephoto cameras generally have relatively long focal lengths and are great for capturing scenes and subject at a far distance. However, the advent of small, mobile multipurpose devices such as smartphones, tablet, pad, or wearable devices has created a need for high-resolution, small form factor cameras for integration in the devices.

Telephoto cameras using light folding prisms have typically utilized composite prisms constructed from combining multiple smaller prisms. However, composite prisms may exhibit lower optical performance, such as due to optical issues introduced by the method of joining multiple prisms. Therefore, it is desirable to have single element light folding prisms constructed from a single piece of material. 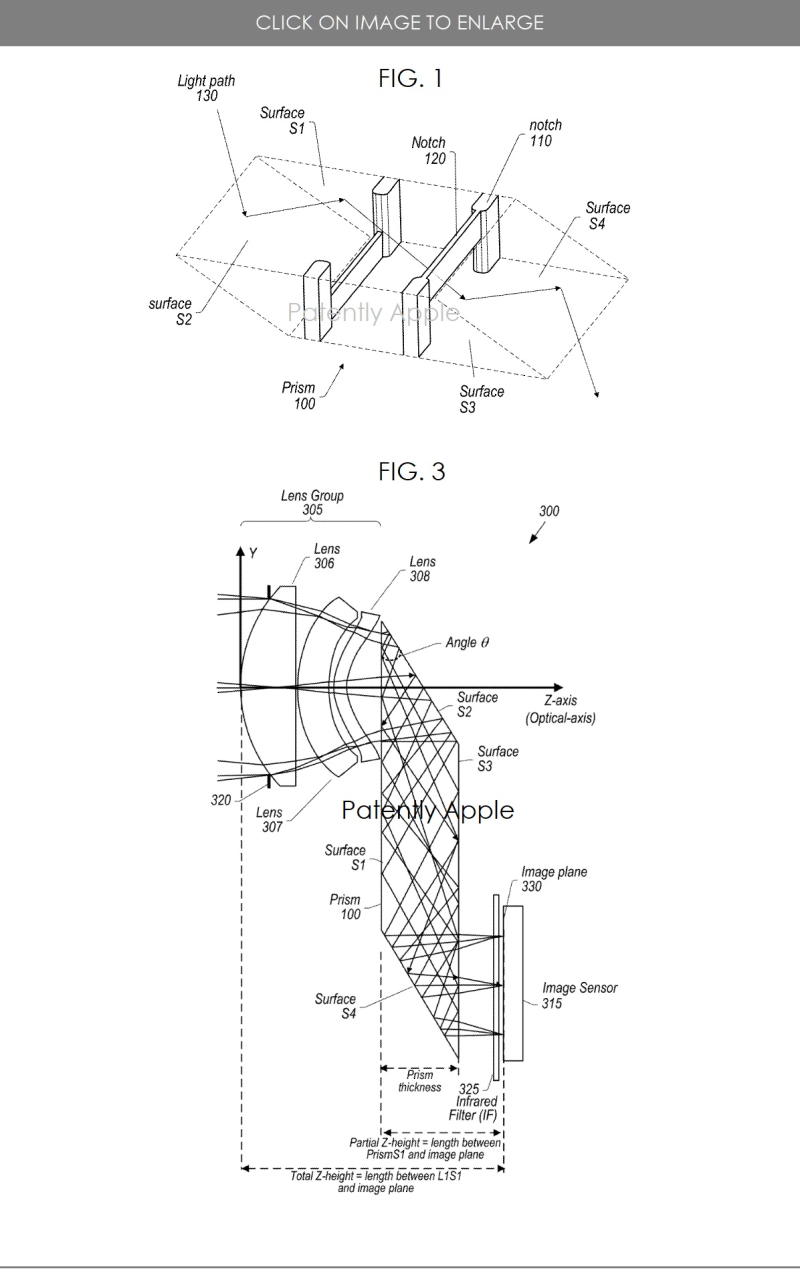 In various embodiments, the device may be any of various types of devices, including, but not limited to, an iPhone, iPad, Macs, netbook computer, mainframe computer system, handheld computer, workstation, network computer, a camera, Apple TV, a mobile device, an augmented reality (AR) and/or virtual reality (VR) headseta consumer device, video game console, handheld video game device, application server, storage device, on televisiona video recording device, a peripheral device such as a switch, modem, router, or in general any type of computing or electronic device.

The folded camera may be for both face and rear cameras.

For camera buffs and engineers wanting to dig further into the details and view a wider range of patent figures, see Apple’s patent application number 20220163706.

One More Thing: Apple continues to work on Glass Device Housings that goes back a decade. You could review our 2015 report on one of their granted patents for this invention here. Today the US Patent Office published another update to this invention under number 20220161385.

Apple has added an additional 20 patent claims added new things like “the housing structureincludes a metal structure” and “the electronic device housing includes a clear portion through which the display is visible.” The title of the patent in 2014 was “Fused Glass Device Housings” whereas today’s update changes the title to simply “Glass Device Housings.”

We use cookies on our website to give you the most relevant experience by remembering your preferences and repeat visits. By clicking “Accept All”, you consent to the use of ALL the cookies. However, you may visit "Cookie Settings" to provide a controlled consent.
Cookie SettingsAccept All
Manage consent

This website uses cookies to improve your experience while you navigate through the website. Out of these, the cookies that are categorized as necessary are stored on your browser as they are essential for the working of basic functionalities of the website. We also use third-party cookies that help us analyze and understand how you use this website. These cookies will be stored in your browser only with your consent. You also have the option to opt-out of these cookies. But opting out of some of these cookies may affect your browsing experience.
Necessary Always Enabled
Necessary cookies are absolutely essential for the website to function properly. These cookies ensure basic functionalities and security features of the website, anonymously.
Functional
Functional cookies help to perform certain functionalities like sharing the content of the website on social media platforms, collect feedbacks, and other third-party features.
Performance
Performance cookies are used to understand and analyze the key performance indexes of the website which helps in delivering a better user experience for the visitors.
Analytics
Analytical cookies are used to understand how visitors interact with the website. These cookies help provide information on metrics the number of visitors, bounce rate, traffic source, etc.
Advertisement
Advertisement cookies are used to provide visitors with relevant ads and marketing campaigns. These cookies track visitors across websites and collect information to provide customized ads.
Others
Other uncategorized cookies are those that are being analyzed and have not been classified into a category as yet.
SAVE & ACCEPT